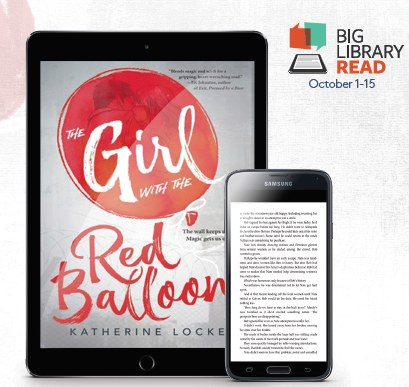 The Girl with the Red Balloon

Rock County, WI – Monday, September 24, 2018 – Rock County public library patrons can join thousands of readers worldwide in the largest global digital book club, Big Library Read, through the library. From October 1-15, book lovers can borrow, read and discuss award-winning author Katherine Locke’s The Girl with the Red Balloon ebook with no waitlists or holds by visiting wplc.overdrive.com or downloading the Libby app. More than 19,000 libraries and schools around the world are participating.

Big Library Read is facilitated by OverDrive, the leading platform for ebooks, audiobooks, and magazines available in more than 90 percent of public libraries in the US and Canada. The Girl with the Red Balloon was chosen by a popular vote of readers and librarians.

“I grew up on family stories and to me, they were as powerful, transformative and magical as the fiction I read in books,” states Locke. “I hope you enjoy the story and, more importantly, I hope you swipe to the last page thinking about your family stories, the magic of your own story, and the magic of storytelling.”

The Girl with the Red Balloon tells the story of sixteen-year-old Ellie Baum who accidentally time-travels via red balloon to 1988 East Berlin and becomes caught up in a conspiracy of history and magic. She meets members of an underground guild in East Berlin who use balloons and magic to help people escape over the Wall—but even to the balloon makers, Ellie’s time travel is a mystery. When it becomes clear that someone is using dark magic to change history, Ellie must risk everything—including her only way home—to stop the process.

“The awesome thing about the Big Library Read being a digital event is so many more people can read the book at the same versus a traditional book club that is limited by the number of books that can be purchased or loaned. Plus, the online discussion connects people around the world!” commented an Arrowhead Library System spokesperson. She continued, “We’re hoping this fantastical YA selection will draw even more teens and adults than the last event.” 67 Rock County citizens took advantage of the 2018 summer Big Library Read, which featured a western adaptation of Pride and Prejudice.

Big Library Read is an international reading program that simultaneously connects millions of readers around the world with an ebook through public libraries. The Girl with the Red Balloon is the 17th selection of this program which began in 2013 and takes place three times per year. Readers can join an online discussion about the book at discuss.biglibraryread.com. The free program runs for two weeks and only requires a library card to one of the seven public libraries in Rock County to get started – they’re free. The Girl with the Red Balloon can be read on all major computers and devices, including iPhone®, iPad®, Android™ phones and tablets, Chromebook™ and Kindle® [US libraries only] without waitlists or holds. The title will automatically expire at the end of the lending period, and there are no late fees.

To join the discussion, learn about past Big Library Read ebooks and download Libby, visit biglibraryread.com.

About Rakuten OverDrive and Libby

OverDrive is the leading digital reading platform for libraries and schools worldwide. Named one of Google Play’s Best Apps of 2017, the award-winning Libby is the “one-tap reading app” for libraries. We are dedicated to “a world enlightened by reading” by delivering the industry’s largest catalog of eBooks, audiobooks, magazines and other digital media to a growing network of 40,000 libraries and schools in 70 countries. Founded in 1986, OverDrive is based in Cleveland, Ohio USA and owned by Tokyo-based Rakuten. www.overdrive.com