Are you familiar with the Biblioboard products?

WPLC started a two-year pilot project to help libraries connect with and support their local writing and reading communities with a suite of offerings from Biblioboard.

Design your own books, newsletters, poetry, novels, and any other written content in digital and print-ready formats using Pressbooks.

Pressbooks is an easy-to-use online software that allows users to create professional-quality print-ready and eBook files.

With the SELF-e program, authors can submit their ebook to SELF-e to have it showcased in the Indie Wisconsin Statewide Collection while retaining all rights to their work. Readers across the state can discover their work with the potential for national exposure.

Through the Wisconsin Author Project, libraries are helping local authors get the recognition they deserve for writing great books. The winner of the 2019 contest was announced at the WLA conference and will be publicized soon!

Wisconsin’s Digital Library includes both the OverDrive and Libby platform and the BiblioBoard library platform.

The Wild Wisconsin Winter Web Conference is a ​state-wide virtual conference developed by the Nicolet Federated Library System and supported by 15 other library systems (including ALS) in Wisconsin.

Library Day at the Fair!

In lieu of a weeklong booth at the Rock County 4-H fair, ALS and member libraries will be hosting a four-hour library festival inside the fair on Wednesday from 10-2. The rough idea is to have stations families can visit anytime we’re there, plus a group activity like starting every half hour. Details to come this spring.

On October 14, PLA and ALA proudly announced the achievement of an important milestone in the #eBooksForAll campaign to condemn Macmillan Publishers’ plan to restrict library access to eBooks. On that date, the number of people to sign our online petition broke the 100,000 mark, and has since exceeded 150,000! PLA is grateful to its members for the tremendous role they’ve played in mobilizing library staff and patrons to take action on this important issue.

On the heels of the #eBooksForAll campaign, ALA released a report urging lawmakers to curb anti-competitive practices of digital market actors. Submitted in response to an inquiry from the U.S. House of Representatives Committee on the Judiciary Subcommittee on Antitrust, Commercial and Administrative Law, the report underscores practices by companies like Amazon and Macmillan Publishers — such as abusive pricing and restrictive licensing terms for libraries — that threaten Americans’ right to read what and how they choose and imperil other fundamental First Amendment freedoms. The report addresses publishers’ abusive pricing and restrictive licensing terms for libraries. Download the report (PDF, 7 pages). In addition to this legislative action, ALA is also considering legal solutions if the embargo does indeed go into effect November 1.

ALA denounces Amazon, Macmillan in response to congressional inquiry on competition in digital markets 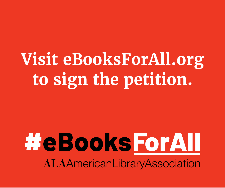 PLA is collaborating with the National Center for Families Learning (NCFL) to offer a free live webcast of the NCFL Families Learning Conference session “How Programs Can Recruit & Engage Culturally Diverse Families,” Monday, Nov. 4, 11:15 a.m. – 12:30 p.m. Eastern. It’s an opportunity to hear from education and library experts who work to engage diverse community groups and how those programs can inform the work of public libraries.

Save the Date: PLSR Implementation Webinars

Shared from WI Libraries For Everyone

Save the Date: PLSR Implementation Webinars

The Department of Public Instruction has begun identifying activities for implementing recommendations included in the Public Library System Redesign (PLSR) Committee’s Recommendation Report. A preliminary timeline has been drafted at the request of COLAND and was presented to both COLAND and SRLAAW.

We will be presenting this timeline of activities at two webinars this November:

The entire Wisconsin library community is invited to attend these sessions. The same material will be presented at both and each webinar will allow time for questions and comments about the proposed activities. Both webinars will be recorded and posted after they are completed.

To keep up to date on PLSR activities, be sure to watch the COLAND webpage. All materials developed and posted to the PLSR.info page will continue to be available but that website is no longer being updated with new information.

Written by Ben Miller, Resources for Libraries and Lifelong Learning